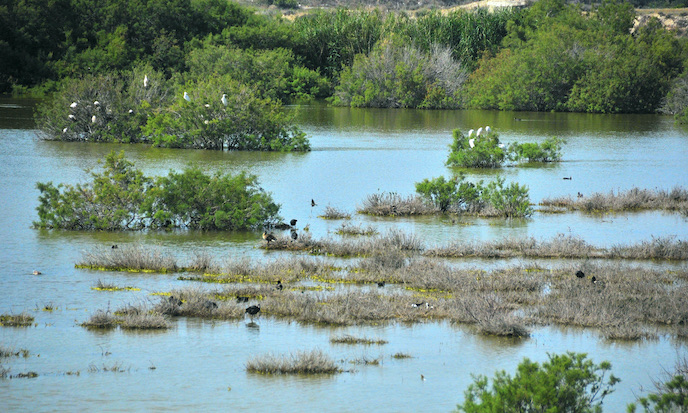 Tourists are not the only visitors that ‘flock’ to Larnaka… a variety of feathered friends – both migrating and indigenous – also favour the region, making it a birdwatching (or birding) haven, and of particular significance on a conservation level for both the Mediterranean and Europe.

Over 350 indigenous and endemic species – along with the migrating species - can be seen on the island. Thanks to its unique location on the migratory route from Europe, Asia and Africa, Cyprus is a key breeding spot that sees around 250 million birds passing through the island each autumn and spring, including bright pink flamingos in their numbers and wild fowls that frequent Larnaka Salt Lake and Voroklini Lake.

Discover more via our Larnaka: A Birdwatching Haven video.

All information on the island's birds and birdwatching can be found at Bird Life Cyprus.

Voroklini Lake (in the village of Voroklini off Dekeleia Road) is one of only seven natural wetlands in Cyprus, and very important on both a Cyprus and pan-European level. As such it is a Special Protection Area (SPA) under the EU Birds Directive, and a Site of Community Importance (SCI) under the EU Habitats Directive. A total of 190 bird species have been recorded at the site, but it is especially important for two bird species; the Black-winged Stilt Himantopus himantopus (which favours the lake as its nesting site above any other area on the island), and the Spur-winged Plover Vanellus spinosus that nest there. Other migratory birds include herons, flamingos and glossy ibis, as well as the pelican, which is a rare sight at the lake for only a handful of days on its way to Africa.

The bird watch found by the lake is one of the projects implemented in a three-year EU-funded LIFE conservation project ‘Restoration and Management of Oroklini Lake’. The project was aimed at protecting this significant wetland and raising awareness of its value for biodiversity. Aside from the bird watch, there is also an information kiosk where you can find out all about the lake's birds  – many of which nest there.

Most famous for the flocks of thousands of vivid Greater Flamingos that frequent the lake during the winter season, Larnaka Salt Lake is actually a complex of four salt lakes, covering a surface area of 2.2 sq km. The main lake with its winding nature path and bird watch tower is known as 'Aliki'. This larger lake is then followed by lakes Orphani, Soros and Airport, stretching all the way to Pervolia, Meneou and Dromolaxia villages.

Located near the old airport and the Hala Sultan Tekke mosque, the lake has huge ecological value and is considered to be one of the most important wetlands of Cyprus. As such, it has been declared a Ramsar Wetlands of International Importance site, an EU Natura 2000 site, a Special Protected Area under the Barcelona Convention, and a Bird Life International Important Bird Area (IBA).

The dark red algae which grows in the Salt Lake is the basis of the food chain, as the small shrimp in the lake feed on it. In turn, this shrimp is food not only for the flamingos, but also other migratory birds, which total more than 85 species. The inflow of fresh water in the Salt Lake is necessary as it maintains the ecological balance of the wetland.

The flamingos stop off at the lake as part of their migratory route, arriving with the first rainy weather (typically in November), and stay at the lake until around March. When there are higher water levels, their numbers can reach tens of thousands, with their distinctive honking noise enjoyed by walkers along Aliki’s path. The honking is actually the flamingo’s way of communicating that they need to stay together, and they shy away from humans coming too close to their habitat.

Whilst we understand that visitors like to view and photograph these majestic birds, it is important to note that wading out into the salt lake to get closer to the flamingos is prohibited as this is highly damaging for the very sensitive birds.

More information can be found on the page of Bird Life Cyprus:

Basic facts about the Greater Flamingo

The cliffs around Cape Kiti are often home to many migrant bird species, such as quail, wryneck and calandra lark.